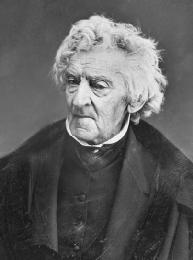 William Cranch served as a federal judge for more than five decades, and was also reporter of decisions for the Supreme Court of the United States from 1801 to 1815.

Cranch was born July 17, 1769, in Weymouth, Massachusetts. His father, Richard Cranch, was a member of the Massachusetts Legislature and judge of the court of Common Pleas, and his mother, Mary Cranch, was the sister of Abigail Adams, wife of the future president John Adams. Educated privately in his early life, Cranch entered Harvard in 1784 and graduated with honors in 1787. He then studied law in Boston and was admitted to the Massachusetts bar in 1790. He subsequently practiced law briefly, first in Braintree, Massachusetts, and then in Haverhill, Massachusetts.

In 1791, Cranch moved to Washington, D.C., to become a legal agent for a real estate firm that made large and speculative investments in the city based on the municipality's recent selection to be the nation's capital. The venture later proved to be financially disastrous, and Cranch was financially ruined as a result of its collapse. In 1800, John Adams, by then president, came to Cranch's rescue by appointing him a commissioner of public buildings for the District of Columbia. In early 1801, the District of Columbia Circuit Court was established, and Adams appointed Cranch an assistant judge of the court. Cranch was elevated to chief judge in 1805 and served on the court for fifty-four years.

"It often happens that the prisoner seeks to palliate his crime by the pleas of intoxication; as if the voluntary abandonment of reason … were not, of itself, an offense sufficient to make him responsible for all its consequences."
—William Cranch

About the same time Cranch became a judge, the Supreme Court of the United States moved from Philadelphia to Washington, D.C. alexander j. dallas, who had reported some of the Court's decisions on an unofficial and fairly informal basis during its terms in Philadelphia, left the position after the Court relocated, and Cranch, while serving on the circuit court, became reporter of the Supreme Court's decisions in 1802. As reporter, Cranch assembled and published the Court's decisions and then sold them to the public and the practicing bar. Cranch was not appointed to the position but took it strictly on his own initiative. Cranch's first volume of published opinions contained the Court's decisions from 1801 to 1804. Before 1804, the Court's opinions had not been readily available to the practicing bar and were known even less by the general public.

In his preface to his first volume, Cranch stated that he hoped the publication of the Court's decisions would eliminate the "uncertainty of the law" while also ensuring its consistency. "Every case decided is a check upon the judge," he wrote. "He cannot decide a similar case differently, without strong reasons, which, for his own justification, he will wish to make public. The avenues to corruption are thus obstructed, and the sources of litigation closed." Cranch went on to publish nine volumes in all, which contained many of the important Constitutional Law decisions of the Court when it was headed by Chief Justice John Marshall. As was the practice during the early days of the Court, the volumes published by Cranch bear his name on the spine.

In addition to his duties as Supreme Court reporter, Cranch enjoyed a distinguished career as a federal circuit court judge. He decided United States v. Bollman & Swartwout, 1 Cranch 379, later upheld on appeal to the Supreme Court (80 S. (4 Cranch) 75 [1807]). Bollman was a Treason case tried against Dr. Justus E. Bollman, Samuel Swartwout, and Aaron Burr, who were accused of conspiring to create a new nation in the western United States. In Bollman, Cranch found that, despite popular opinion to the contrary, the arrest of Aaron Burr's accomplices was not justified because of insufficient evidence. Cranch also wrote a number of papers and articles on legal topics, and in 1817, delivered a series of lectures about his uncle, the president, that was later published as Memoir of the Life, Character, and Writings of John Adams (1827). Cranch continued as reporter through the War of 1812. By that time, his own judicial workload as well as the increasing number of opinions issued by the Marshall Court caused him to fall steadily behind schedule, so that opinions often did not appear in print until long after they had first been issued by the Court. Furthermore, though Cranch was credited for providing the text of lawyers' arguments and introducing summaries of the principal points decided in a case, he was also widely criticized by members of the bar for his inaccurate and sometimes obscure notes and annotations. Under pressure from some members of the Court, Cranch resigned the reporter's post, which had not been financially lucrative for him, and was replaced in 1815 by Henry Wheaton, the Court's first officially appointed reporter and the first to be paid a yearly salary.

Cranch continued to serve as judge on the District of Columbia Circuit Court for another forty years after leaving the Supreme Court. He remained active in publishing, assembling and publishing in 1853 the decisions of his own court in six volumes. He also wrote other scholarly and political works, sometimes published under pseudonyms, until his death in 1855 at the age of eighty-seven.

Feedback
Flashcards & Bookmarks ?
Please log in or register to use Flashcards and Bookmarks. You can also log in with
Flashcards ?
My bookmarks ?
+ Add current page to bookmarks
References in periodicals archive ?
Further progress stemmed from the collaboration of John Adams Whipple, a studio daguerreotypist in Boston, and William Cranch Bond, a clockmaker by trade and first director of Harvard College Observatory.
Picturing the heavens: the rise of celestial photography in the 19th century
Harvard Observatory was begun through the initiative of William Cranch Bond, who had made observations for some years at his home and then moved to Dana House in 1839.
1843: Business and industry; science; education; philosophy and religion
I had been sifting through the diaries of William Cranch Bond and his son, George Phillips Bond, Harvard's first two astronomers, when I noticed that on October 30, 1847, the Bonds had as guests "Prof.
Longfellow: voice of the night
Ring C was independently discovered in November 1850 by Dawes in England and by William Cranch Bond and his son, George, at Harvard College Observatory ("Saturn's Enigmatic Crepe Ring" S&T, September 1998, page 116).
Beyond the Dawes limit: observing Saturn's ring divisions: in theory it can't be done, yet under optimal seeing conditions you might discern delicate ring structures through surprisingly small telescopes
When Harvard Observatory director William Cranch Bond and his son George turned the newly installed 15-inch refractor to it in 1847, they saw it sprinkled with stars.
My Favorite Deep-Sky Wonders : Of all the sky's star clusters, nebulae, and galaxies, which would you choose as your favorites? One well-known observer unveils his list of must-see treasures
Whipple, working under the direction of William Cranch Bond, was carrying out an experiment with the great 15-inch refractor at Harvard College Observatory.
50 & 25 YEARS AGO
A number of talented assistants worked at Harvard Observatory under its first director, William Cranch Bond.
Phillip Sidney Coolidge: Harvard's romantic explorer of the skies
Legal browser ?
Full browser ?
CITE
Site: Follow: Share:
Open / Close