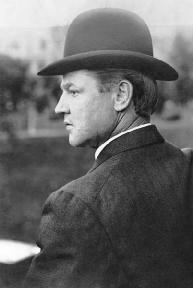 Labor leader Bill Haywood was regarded as a radical in the growing labor movement in the United States. A public figure throughout most of his life, Haywood was the central figure in two famous court cases.

Haywood was born in 1869 in Salt Lake City, Utah. In 1896, Haywood, a coal miner, became an active participant in the Western Federation of Miners. He rapidly rose to prominence in the federation, securing offices of leadership by 1904. His tactics were militant in nature, as was evidenced by the violence of the Cripple Creek strike that occurred in Colorado in 1904.

In 1905, former Idaho Governor Frank Steunenberg was killed by an explosion caused by a bomb hidden in his home by Harry Orchard. Orchard admitted his guilt and implicated three leaders of the Western Federation of Miners: President Charles H. Moyer, Secretary-Treasurer Haywood, and retired leader George A. Pettibone. These men were abducted from Denver and taken to Boise, Idaho, to stand trial. The Haywood-Moyer-Pettibone case took on national significance for two reasons: (1) it involved a radical labor organization, and (2) eminent attorney clarence darrow acted as defense attorney. The three men were subsequently acquitted (Pettibone v. Nichols, 203 U.S. 192, 27 S. Ct. 111, 51 L. Ed. 148 [1906]).

"It is the historic mission of the working class to do away with capitalism."
—William Haywood

The Industrial Workers of the World (IWW) was established in 1905, and Haywood was the founder and director of this labor organization. He was a proponent of group action and class struggle, and he abhorred compromise. He continued to use violence in his fight for labor, and led two infamous textile workers' strikes in Lawrence, Massachusetts (1912), and in Paterson, New Jersey (1913).

Haywood and other members of his IWW organization attempted to become members of the Socialist party but were rejected for their theories of violent action.

In 1918, Haywood was again on trial. One hundred sixty-five IWW leaders, including Haywood, were accused of seditious activities during World War I. Haywood was found guilty and sentenced to spend the next twenty years in prison.

Haywood was free on bail in 1921, pending the date of a new trial, when he escaped and sought Asylum in the Soviet Union. He died in Moscow seven years later.