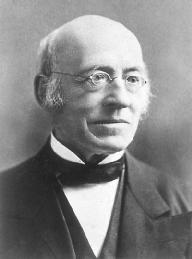 William Lloyd Garrison, publisher of the anti-slavery newspaper The Liberator and founder of the American Anti-Slavery Society, was one of the most fiery and outspoken abolitionists of the Civil War period.

Garrison was born in Newburyport, Massachusetts, on December 10, 1805. In 1808, Garrison's father abandoned his family leaving them close to destitute. At age 13, after working at a number of jobs, Garrison became an apprentice to Ephraim Allen, editor of the Newbury-port Herald.

Garrison later moved to Boston where he became editor of the National Philanthropist in 1828. At that time, Garrison became acquainted with the prominent Quaker Benjamin Lundy, editor of the Baltimore-based antislavery newspaper, the Genius of Universal Emancipation. In 1829, Garrison became co-editor of Lundy's publication and began his vigorous advocacy for abolishing Slavery. Shortly thereafter, Garrison was sued by a merchant engaged in the slave trade. He was convicted of libel and spent seven weeks in prison, an experience that strengthened his conviction that all slaves should be set free.

After his release from jail in 1830, Garrison returned to Boston where he joined the American Colonization Society, an organization that promoted the idea that free blacks should emigrate to Africa. When it became clear that most members of the group did not support freeing slaves, but just wanted to reduce the number of free blacks in the United States, Garrison withdrew from membership.

In January 1831, Garrison founded The Liberator, which he published for 35 years and which became the most famous antislavery newspaper of its era. Although he was a pacifist, Garrison struck a formidable stance in the very first issue in which he proclaimed, "I do not wish to think, or speak, or write, with moderation … I will not retreat a single inch—AND I WILL BE HEARD." The Liberator, which never had a paid circulation greater than three thousand became one of the most widely disseminated, consistent, and dominating voices of the Abolition movement.

Antislavery advocates of the day, or abolitionists, were widely divergent in their views of how and when slavery should be ended and what should happen to freed slaves after emancipation. Garrison was part of a group which believed that abolition of slavery must happen as quickly as possible. Those who sought "immediatism," however were divided on how to achieve this goal. Garrison, though searing in his language and unyielding in his beliefs, believed only in civil disobedience, and opposed any method of active resistance.

In 1832, Garrison founded the country's first immediatist organization, the New England Anti-Slavery Society. The following year, in 1833, he helped organize the American Anti-Slavery Society. He wrote the society's constitution and became its first corresponding secretary. He befriended fellow abolitionist and writer Frederick Douglass, and made him an agent of the Anti-Slavery Society. Over the next several years Garrison came to reject the teachings of established churches and the government of the United States, which he viewed as supporting slavery. Increasingly hewing to a philosophy of moral absolutism, Garrison embraced not only the cause of nonviolent resistance, but temperance, Women's Rights, and Christian perfectionism.

In 1840, Garrison's views precipitated a split in the Anti-Slavery Society between the minority who supported his radical beliefs and the majority who disapproved of his views regarding religion, government, and the participation of women in the struggle for emancipation. When Garrison's supporters voted to admit women, a group seceded from the society and formed the rival American and Foreign Anti-Slavery Society. Another group, interested in continuing to seek reform through political activity, later left to start the Liberty party.

Over the next two decades, Garrison's influence declined as his radicalism became more pronounced. In the 1850s, The Liberator hailed John Brown's raid on Harpers Ferry while denouncing the Compromise of 1850, the Kansas-Nebraska Act, and the U.S. Supreme Court's decision in Dred Scott v. Sandford. He continued to support secession of the anti-slavery states and publicly burned a copy of the U.S. Constitution at an abolitionist rally in 1854.

"I do not wish to think, or speak, or write, with moderation…. I am in earnest—I will not equivocate—I will not excuse—I will not retreat a single inch—and I will be heard."
—William Lloyd Garrison

After the Civil War began, Garrison put aside his Pacifism to support President Abraham Lincoln and the Union Army. He welcomed the Emancipation Proclamation and the passing of the Thirteenth Amendment, which outlawed slavery. In 1865, Garrison published the last issue of The Liberator, although he continued to advocate for women's rights, temperance, and pacifism. Garrison died on May 24, 1879, in New York City.

Feedback
Flashcards & Bookmarks ?
Please log in or register to use Flashcards and Bookmarks. You can also log in with
Flashcards ?
My bookmarks ?
+ Add current page to bookmarks
Mentioned in ?
References in periodicals archive ?
They include John Brown, Lydia Maria Child, Frederick Douglass, Abby Kelley Foster, William Lloyd Garrison, Jermain Wesley Loguen, Elijah Parish Lovejoy, Myrtilla Miner, Lucretia Mott, Wendell Phillips, John Rankin, George Gavin Ritchie, Gerrit Smith, Lewis Tappan, Sojourner Truth, Harriet Tubman, and Theodore Dwight Weld.
The man with the branded hand: one hundred and seventy years ago, a man with Michigan ties endured one of the most extraordinary criminal sentences in American history
William Lloyd Garrison for instance desired the equality of the races--a more radical abolitionist attitude.
Extracting abolitionist abstraction: the sectional crisis through Virginia and North Carolina Baptist print-culture
Massachusetts-born William Lloyd Garrison (1805-1879) helped lead the abolitionist campaign against slavery in the United States.
Black History weekend slated; OSV presents events
Should we take William Lloyd Garrison, John Brown, or Frederick Douglass as representative of antebellum antislavery?
The Abolitionist Imagination
Subject matter that unsurprisingly receive a lot of attention include the institution of slavery and the abolition movement, temperance, women's rights, education, politics, emancipation, racism, suffrage, and historical personalities, namely John Brown, William Lloyd Garrison, and Abraham Lincoln.
In the Words of Frederick Douglass: Quotations from Liberty's Champion
Each chapter examines a thematically connected trio of individuals, including: the abolitionists William Lloyd Garrison, John Brown, and Wendell Phillips; the utopian writers Margaret Fuller, Albert Brisbane, and Edward Bellamy; the anarchistic thinkers Henry David Thoreau, Benjamin R.
Critics and crusaders; political economy and the American quest for freedom. (reprint 1947)
(At the first North American Anarchist Studies Network conference in 2009, Professor Sartwell suggested that William Lloyd Garrison had anarchistic leanings and was practically lynched.) With The Practical Anarchist, Sartwell provides the scholarly world in general and the anarchist studies milieu in particular with much-needed proof that none of us really know what we are talking about.
The Practical Anarchist: Writings of Josiah Warren
In particular, abolitionists like William Lloyd Garrison smartly appealed to Christian ideas as they fought for the liberation of slaves, as did women's rights activists such as Elizabeth Cady Stanton.
The Myth of American Religious Freedom
Although eastern leaders like William Lloyd Garrison and the Tappans remained the most visible and well-known figures to their fellow reformers (and, especially, their enemies), the West increasingly became the most dynamic and vital center of abolitionist ideological expansion.
"All the truly wise or truly pious have one and the same end in view": Oberlin, the West, and abolitionist schism
8.9.5: Draw on biographies to explain the abolitionist movement and its leaders including Theodore Weld, William Lloyd Garrison, David Walker, Frederick Douglass, John Brown, Harriet Beecher Stowe, Charles Redmond, and Sojourner Truth.
Making and measuring the California history standards: the story of California's history-social science framework, standards, and tests sheds light on how and why education reforms evolve and change, at times become inconsistent, and often produce unintended consequences
In virtue of claims counter to those of Williams, the publishers and promoters of Williams' narrative withdrew it from circulation sometime during the last quarter of 1838; the narrative had been published and promoted by the American Anti-Slavery Society which had been founded in 1833 by Arthur Tappan and William Lloyd Garrison.
Slavery and Sentiment: The Politics of Feeling in Black Atlantic Antislavery Writing, 1770-1850