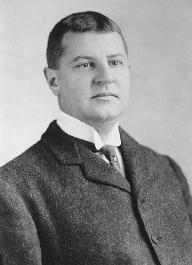 William Miller Collier was born November 11, 1867, in Lodi, New York. He graduated from Hamilton College with a bachelor of arts degree in 1889 and a master of arts degree in 1892. He was the recipient of several other degrees from various institutions, including an honorary doctor of laws degree from New York University in 1920; a doctor of Civil Law degree from Wesleyan University in 1920; and a doctor of letters and humanities degree from Hobart College in 1920. After his admission to the New York bar in 1892 Collier established his law firm in Auburn and practiced law until 1903. From 1903 to 1904 he performed the duties of special assistant to the U.S. attorney general where his main task was the enforcement of antitrust laws.

In 1905 Collier entered the diplomatic field and for the next four years he served as U.S. minister to Spain.

Collier's next field of endeavor was that of education. He presented a series of lectures on International Law at New York Law School from 1912 to 1918. He became president of George Washington University in that same year and served in this capacity for the next three years.

In 1921 Collier reentered the foreign service and served as ambassador to Chile until 1928.

Collier was the author of several noteworthy publications, including Collier on Bankruptcy (1898); Collier on Civil Service Law (1901); The Trusts: What Can We Do with Them—What Can They Do for Us? (1900); and The Influence of Lawyers in the Past and in the Future (1921).