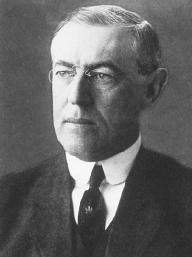 Educator, political reformer, and the 28th president of the United States, Woodrow Wilson significantly affected domestic and international affairs during his two terms in office. Wilson made advances in education while he was the president of Princeton University in the early 1900s, before entering politics as the governor of New Jersey in 1910. He was elected president first in 1912 and again in 1916. He emerged from the tragedy of World War I as an international leader who campaigned widely for the creation of the League of Nations—the postwar international organization that was the forerunner of the United Nations. But political battles with a reluctant Congress ultimately dashed his hopes of U.S. participation in the League.

Born on December 28, 1856, in Staunton, Virginia, Thomas Woodrow Wilson was the third of four children of devoutly religious parents, Janet Woodrow Wilson and Joseph Ruggles Wilson. The U.S. Civil War prevented him from beginning school until the age of nine, but the intellectual atmosphere fostered largely by his father, a Presbyterian minister, helped him to excel. After graduation from Princeton University in 1879, he studied law at the University of Virginia and became a member of the bar in 1882. He established a law practice in Atlanta, Georgia, but later returned to school to study political science at Johns Hopkins University, earning his doctorate in 1886.

"America was set up and opened her doors, in order that all mankind might come and find what it was to release their energies in a way that would bring them comfort and happiness and peace of mind."
—Woodrow Wilson

Professionally, Wilson worked in the area of education before entering politics. Between 1885 and 1892, he taught history and political economy first at Bryn Mawr College, then at Wesleyan University, and finally at Princeton. As president of Princeton from 1902 to 1910, he became known as an educational reformer. His improvements to teaching were welcomed until he set out on a bold plan to reform the social structure of the school by eliminating class distinctions, an effort that was severely criticized. Elected governor of New Jersey in 1910, Wilson pursued reform policies that won greater approval: he improved worker's compensation and the school system while also providing for better control of Public Utilities.

In 1912, the strength of Wilson's accomplishments at Princeton and as governor helped to take him to the White House. Running as a Democrat, he also benefited from a rift in the Republican Party that split votes between Theodore Roosevelt and William Howard Taft.

Wilson called his domestic program the New Freedom. It consisted of far-ranging economic and labor reforms. In a dramatic return to an old tradition, he addressed Congress personally, asking for passage of the legislation, and Congress largely complied. In 1913, the Underwood Tariff Act instituted the Income Tax but decreased the tariff on certain imports. The Federal Reserve Act of 1913 (38 Stat. 251), which reorganized the national banking system, is regarded as the most important banking reform in history. It gave the federal government control over the Federal Reserve Board while also providing agricultural credits to farmers.

The extent of Wilson's idealism can be seen in other significant reforms. In 1914, the Federal Trade Commission was established to discourage business corruption, and the clayton antitrust act (15 U.S.C.A. § 12 et seq.) was passed in order to restrict businesses from monopolizing—unfairly dominating—individual markets. Three constitutional amendments were ratified during the Wilson administration: the provision for the direct election of U.S. senators in 1913 (Seventeenth Amendment); the Prohibition of the manufacture, sale, and transportation of liquor in 1917 (Eighteenth Amendment); and the granting of the right to vote to women in 1920 (Nineteenth Amendment).

World War I and its aftermath tested Wilson. The United States was neutral at the onset of war in 1914. Despite the entreaties of allies, it did not enter the war until nearly two years after Germany had begun attacking ships with submarines. (Germany sank the English ship Lusitania on May 7, 1915, killing more than 100 U.S. passengers.) More German attacks on ships carrying U.S. passengers forced Wilson's hand. In 1917, his war speech included the celebrated phrase, "the world must be made safe for democracy." As the defeat of Germany became imminent in 1918, Wilson put forth his Fourteen Points, a post-war program that he hoped would establish a lasting peace.

Besides economic, political, and geographic proposals, Wilson's plan proposed the creation of an international peacekeeping body to be called the League of Nations. Traveling to Europe in 1918 for the signing of a peace treaty at Versailles, France, Wilson was praised. This acclaim was not heard at home, where domestic criticism of his proposed League of Nations forced him to make concessions. He traveled widely across the nation campaigning on behalf of his plan. Ultimately, however, opposition in the U.S. Senate, based on the conviction that the United States should stay out of European affairs, scuttled plans for U.S. participation in the League. Wilson also suffered personally at this time. A stroke in 1919 rendered him an invalid for the rest of his life.

History has sometimes judged Wilson to be too much of an idealist, particularly in foreign affairs. The disastrous Versailles Treaty, in particular, sowed the seeds of a second world war. Yet his leadership during the war was inspirational, and his plan for international participation after the war was largely achieved in later decades under the aegis of the United Nations. For these accomplishments, Wilson was awarded the 1919 Nobel Peace Prize. He died on February 3, 1924, in Washington, D.C.

Carroll, James Robert. 2001. The Real Woodrow Wilson: An Interview with Arthur S. Link, Editor of the Wilson Papers. Bennington, Vt.: Images from the Past.