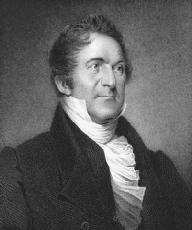 William Wirt served as U.S. attorney general from 1817 to 1829, the longest tenure in U.S. history. Wirt is recognized as one of the most important holders of that office, as he increased its prestige, established administrative record keeping, and defined the functions and authority of the attorney general that have remained unchanged.

Wirt was born on November 8, 1772, in Bladensburg, Maryland. He was educated at private schools and for a time worked as a private tutor. Wirt studied law and became a member of the Virginia bar in 1792. Though he established a private practice and showed remarkable talent as a lawyer, he was drawn into Virginia politics. He served as clerk of the Virginia House of Delegates in 1800 and in 1802 was chancellor of the eastern district of Virginia. Wirt's political involvement led to friendships with several prominent Virginians, including Thomas Jefferson, James Madison, and James Monroe.In 1807 President Jefferson appointed Wirt prosecuting attorney in the Treason trial of Aaron Burr. Though Burr was acquitted of all charges, Wirt had entered the national political arena. He continued to practice law, but he was also a Latin scholar and an author. In 1817 he published Sketches of the Life and Character of Patrick Henry.

In that same year President Monroe appointed Wirt attorney general. When Wirt entered his office for the first time he discovered that none of his eleven predecessors had left any books or records to document what they had done. Appalled at this lack of institutional memory, Wirt announced that he would keep a regular record of every official opinion he rendered for the use of his successors. This collection became known as the Official Opinions of the Attorney General, which has been maintained by every succeeding attorney general.

During his long service, Wirt argued numerous cases before the U.S. Supreme Court, including the landmark cases of mcculloch v. maryland, 17 U.S. (4 Wheat.) 316, 4 L. Ed. 579 (1819) and gibbons v. ogden, 22 U.S. (9 Wheat.) 1, 6 L. Ed. 23 (1824). In McCulloch the Court affirmed the power of Congress to charter a national bank and denied states the right to tax a federal instrumentality. In Gibbons the court upheld the right of the federal government to control matters of interstate commerce. The case involved the authority of a state to grant private individuals monopolies to operate steamboats in Navigable Waters over which the federal government had authority. The Court held that the U.S. Constitution's Commerce Clause empowered Congress to regulate interstate commerce, establishing a precedent that had farreaching effects in the economic expansion of the nineteenth century.

Wirt served in both Monroe administrations and in the administration of President john quincy adams. He left office in 1829 and moved to Baltimore, where he practiced law. He died on February 18, 1834, in Washington, D.C.