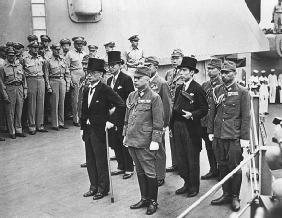 A suspending or cessation of hostilities between belligerent nations or forces for a considerable time. An armistice differs from a mere "suspension of arms" in that the latter is concluded for very brief periods and for local military purposes only, whereas an armistice not only covers a longer period, but is agreed upon for political purposes. It is said to be general if it relates to the whole area of the war, and partial if it relates to only a portion of that area. Partial armistices are sometimes called truces but there is no hard and fast distinction.

Armistice Day originated as a day set aside by the United States, Great Britain, and France to commemorate the signing of the armistice on November 11, 1918, that brought an end to World War I. After World War II, it became a day for tribute to those who lost their lives in that conflict as well. In Canada, it became known as Remembrance Day, and in Britain the Sunday closest to November 11 was declared Remembrance Sunday to honor the dead of both world wars. In 1938, the day was made a federal holiday in the United States.

In 1954, after the Korean War, President dwight d. eisenhower signed an act of Congress (5 U.S.C.A. § 6103 (a) [1995]) to change the name of the holiday to Veterans Day "to honor veterans on the eleventh day of November of each year … a day dedicated to world peace." Thus, Veterans Day now honors all U.S. veterans of all wars. From 1971 to 1977, the holiday was celebrated on the fourth Monday in October, but in 1978, the traditional date of November 11 was restored.

Veterans Day celebrations in towns and cities in the United States usually include parades, speeches, and floral tributes placed on soldiers' graves or memorials, with special services held at the Tomb of the Unknown Soldier in Arlington National Cemetery, in Arlington, Virginia, outside Washington, D.C. Group naturalization ceremonies, in which individuals are made citizens of the United States, have also become part of Veterans Day celebrations.

ARMISTICE. A cessation of hostilities between belligerent nations for a considerable time. It is either partial and local, or general. It differs from a mere suspension of arms which takes place to enable the two armies to bury their dead, their chiefs to hold conferences or pourparlers, and the like. Vattel, Droit des Gens, liv. 3, c. 16, Sec. 233. The terms truce, (q.v.) and armistice, are sometimes used in the same sense. Vide Truce.

Feedback
Flashcards & Bookmarks ?
Please log in or register to use Flashcards and Bookmarks. You can also log in with
Flashcards ?
My bookmarks ?
+ Add current page to bookmarks
Mentioned in ?
References in periodicals archive ?
The First World War, and the Armistice, should be part of peace education curricula.
The Armistice signed in 1918 paved the way for several peace treaties, World War I finally coming to an end only in 1920 with the Treaty of Versailles.
Armistice
Lowry then moves on to discuss Great Britain and the armistice. He explains that Great Britain had initially entered the war in 1914 because of "the immediate danger that Germany might win Continental hegemony," and because relations between the two countries had taken a turn for the worse in the past few decades.
French involvement in the armistice discussion centered around Prime Minister Georges Clemenceau and Marshal Foch.
Armistice 1918