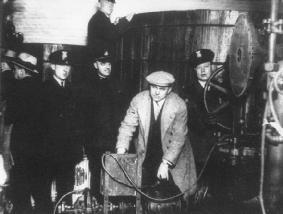 The popular name for the period in U.S. history from 1920 to 1933 when the manufacture and sale of alcoholic beverages—except for medicinal or religious purposes—were illegal.

From 1920 to 1933 the manufacture and sale of intoxicating liquors were illegal in the United States. The Eighteenth Amendment to the U.S. Constitution authorized Congress to prohibit alcoholic beverages, but the twenty-first Amendment repealed this prohibition. The era of Prohibition was marked by large-scale Smuggling and illegal sales of liquor, the growth of Organized Crime, and increased restriction on personal freedom.

The prohibition movement began in the 1820s in the wake of a revival of Protestantism that viewed the consumption of alcohol as sinful and a destructive force in society. Maine passed the first state prohibition law in 1846, and other states followed in the years before the U.S. Civil War.

The Prohibition Party was founded in 1869, with a ban on the manufacture and sale of intoxicating liquor as its only campaign goal. This party, like most temperance groups, derived its support from rural and small-town voters associated with Protestant evangelical churches. The Prohibition Party reached it zenith in 1892 when its candidate for president polled 2.2 percent of the popular vote. The party soon went into decline, and though it still exists, it works mainly at the local level.

The impetus for the Eighteenth Amendment can be traced to the Anti-Saloon League, which was established in 1893. The league worked to enact state prohibition laws and had great success between 1906 and 1913. By the time national prohibition took effect in January 1920, thirty-three states (63 percent of the total population) had prohibited intoxicating liquors.

The league and other prohibition groups were opposed to the consumption of alcohol for a variety of reasons. Some associated alcohol with the rising number of Aliens entering the country, many of whom were Roman Catholic. This anti-alien, anti-Catholic prejudice was coupled with a fear of increasingly larger urban areas by the rural-dominated prohibition supporters. Saloons and other public drinking establishments were also associated with prostitution and gambling. Finally, some employers endorsed prohibition as a means of reducing industrial accidents and increasing the efficiency of workers.

When the United States entered World War I in 1917, Congress prohibited the manufacture and importation of distilled liquor in order to aid the war effort. It also authorized the president to lower the alcoholic content of beer and wine and to restrict or forbid their manufacture.

A movement began to support elimination of intoxicating liquors by constitutional amendment. In 1917 Congress passed the Prohibition amendment and submitted it to the states for ratification. The rural-dominated state legislatures made ratification a foregone conclusion, and the Eighteenth Amendment was ratified on January 29, 1919. Congress enacted the Volstead Act, officially known as the National Prohibition Act (41 Stat. 305 [1919]) to enforce the amendment, which became effective on January 29, 1920.

Prohibition proved most effective in small towns and rural areas. Compliance was much more difficult in urban areas, where illegal suppliers quickly found a large demand for alcohol. Cities had large immigrant populations that did not see anything morally wrong with consuming alcohol. The rise of "bootlegging" (the illegal manufacture, distribution, and sale of intoxicating liquor) by organized crime proved to be one of the unintended consequences of Prohibition.

Besides the illegal importation, manufacture, distribution, and sale of intoxicating liquors by organized crime, millions of persons evaded Prohibition by consuming "medicinal" whiskey that was sold in drugstores on real or forged prescriptions. Many U.S. industries used denatured alcohol, which was treated with noxious chemicals to make it unfit for human consumption. Nevertheless, methods were found to remove these chemicals, add water and a small amount of liquor for flavor, and sell the mixture to illegal bars, called speakeasies, or to individual customers. Finally, many persons resorted to making their own liquor from corn. This type of product could be dangerously impure and cause blindness, paralysis, and death.The prohibition movement lost political strength in the 1920s. The Stock Market crash of 1929 and the resulting Great Depression of the 1930s further changed the political climate. Critics of Prohibition argued that the rise of criminal production and sale of alcohol made the legal ban ineffective. In addition, the general public's patronage of speakeasies bred disrespect for law and government. Finally, critics argued that legalizing the manufacture and sale of alcohol would stimulate the economy and provide desperately needed jobs.

In 1932 the Democratic Party adopted a platform plank at its national convention calling for repeal. The landslide Democratic victory of 1932 signaled the end of Prohibition. The February 1933 resolution proposing the Twenty-first Amendment contained a provision requiring ratification by state conventions rather than state legislatures. This provision was included to prevent rural-dominated legislatures, which still supported Prohibition, from defeating the amendment.

The state ratification conventions quickly endorsed the amendment, with ratification of the Twenty-first Amendment coming on December 5, 1933. The amendment did allow prohibition by the states. A few states continued statewide prohibition, but by 1966 all states had repealed these provisions. Liquor in the United States is now controlled at the local level. Counties that prohibit the sale of alcohol are known as dry counties, and counties that allow the sale of alcohol are known as wet counties.

PROHIBITION, practice. The name of a writ issued by a superior court, directed to the judge and parties of a suit in an inferior court, commanding them to cease from the prosecution of the same, upon a suggestion that the cause originally, or some collateral matter arising therein, does not belong to that jurisdiction, but to the cognizance of some other court. 3 Bl. Com. 112; Com. Dig. h.t.; Bac. Ab. h.t. Saund. Index, h.t.; Vin. Ab. h.t.; 2 Sell. Pr. 308; Ayliffe's Parerg. 434; 2 Hen. Bl.
2. The writ of prohibition may also be issued when, having jurisdiction, the court has attempted to proceed by rules differing from those which ought to be observed; Bull. N. P. 219; or when, by the exercise of its jurisdiction, the inferior court would defeat a legal right. 2 Chit. Pr. 355.

Feedback
Flashcards & Bookmarks ?
Please log in or register to use Flashcards and Bookmarks. You can also log in with
Flashcards ?
My bookmarks ?
+ Add current page to bookmarks
Mentioned in ?
References in periodicals archive ?
The President, National Association of Yam Farmers, Processors and Marketers, Professor Simon Irtwange, said the association has earlier appealed to the federal government and the National Assembly, to expedite action on the repeal of the Export Prohibition Act of 1989, to enhance yam export.
Stakeholders Seek Urgent Repeal On Law Hampering Yam Export
However, for a state facing severe resources crunch, prohibition will entail in a loss of a major source of income.
Y.S. Jaganmohan Reddy asks officials to introduce prohibition in phased manner
She added that their responsibilities also include the monitoring of all chemical activities related to the work of the National Committee, in order to ensure the effective application of the Convention on the Prohibition of Chemical Weapons, based on the Kingdom's keenness and belief in the need to comply with the content of this Convention and to pursue its role in the maintenance of international peace and security.
Undersecretary meets French officials
10429 stipulated that the period for such prohibition as provided for in Resolution is from February 12, 2019 (Tuesday) to May 13, 2019 (Monday).
Can local candidates still donate?
And to celebrate the move, Mitch and his staff filmed a Prohibition promotional video which he described as a tongue-in-cheek take on scenes reminiscent of Peaky Blinders.
See the Prohibition Cabaret Bar team's film celebrating grand moving plans; The 1920s-style films captures the team on the move from Gateshead to its planned new home in Newcastle
He said, "Bihar government will present an amendment law on the liquor prohibition act in the upcoming monsoon session of the state assembly."
Bihar Government to introduce amendment on liquor ban
I will focus on one such obligation, the prohibition of torture and inhumane treatment.
Towards an 'absolute' prohibition on torture: Jessica Sutton discusses new challenges for international humanitarian law in a changing world
Leicestershire County Council Highways has agreed to a temporary traffic regulation order for work which began on Monday (April 23) and is due to be completed by the end of August The restrictions include temporary imposition of prohibition of waiting and loading at any time, temporary prohibition of through traffic, temporary speed restrictions and a temporary prohibition of overtaking.
Months of surface dressing are on the way
The War on Alcohol: Prohibition and the Rise of the American State.
The War on Alcohol: Prohibition and the Rise of the American State
Patna, Dec 13 (IANS) BJP ally Hindustan Awami Morcha (HAM) chief and former Chief Minister Jitan Ram Manjhi on Wednesday questioned Chief Minister Nitish Kumar's much-hyped prohibition policy in Bihar and termed it a failure."Prohibition has failed in Bihar.
BJP ally Manjhi questions Nitish's prohibition in Bihar
Panneerselvam and jailed Sasikala represented by CM Palanisamy, there are other problems like the strong farmers' movement for justice and the people's movement to make the state from liquor by implementing the prohibition in total, among other strikes by state government employees with demands.
India: Popular anti-liquor movement in Tamil Nadu
The National Constitution Center has brought back "American Spirits: The Rise and Fall of Prohibition," on view through July 16.
This round is on the house